If you really want to maximize your harvest from a small plot of land (and I think most readers do) you should definitely think about planting multiple crops in succession in the same spot over the growing season. Too often people (myself included) plant a crop in the spring, harvest it in say late July, and then leave the ground bare into the fall, not realizing the potential for late-summer/fall growing. In our food garden today we removed and composted the old pea vines, tilled in the weeds and debris and then created two long planting strips in the beautiful dark Earth.

We'll let the planting area sit and mellow for roughly a week (maybe less if we can't wait) before we plant salad greens and a fall crop of carrots. That gives the leafy green debris that was tilled in a chance to decompose a bit before we plant. We could have also tilled the full pea vines into the soil, returning them directly. If we did that we would probably have to wait a bit longer to plant the succeeding crop. As fibrous plant matter decomposes the microbes actually draw the available nitrogen from the soil and tie it up, not a good thing for any crops that you're trying to grow simultaneously. I think it's best to haul the plant matter away to the compost (to be spread on the same soil later of course) if really intensive growing is your goal.

In the Annapolis Valley there is still plenty of time to plant lettuces, spinach, carrots, kohlrabi, most leafy brassicas, turnips, chard, beets and even early maturing peas. Alternatively you could also plant green manure crops to enrich the soil after the main crop is finished. I like to plant buckwheat to succeed my pea seed crop which comes out in August. The buckwheat gets tilled back in to the soil in September or October when it's flowering, feeding an influx of organic matter to the abundant soil microbes and earthworms.
Before: picking up the pea stakes before scything down the plants. 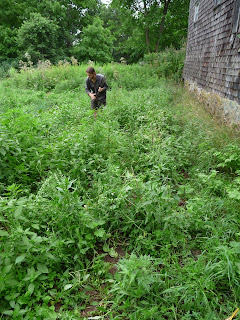 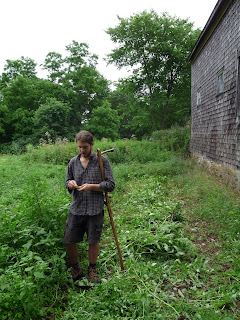 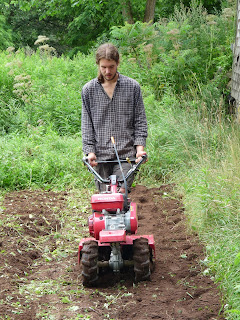 After: the finished bed ready for planting. 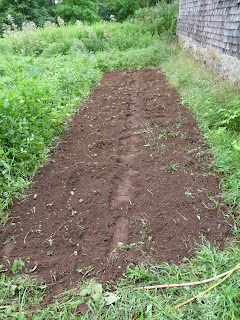 (Thanks to Regine for the photos!)
Posted by Owen Bridge at 9:25 AM