A few nights ago we had our first touch of light frost in the low lying parts of the garden. Although most of the garden made it through without much harm, the peanuts and sweetpotatoes were both damaged by it. I dug them up yesterday afternoon where I took these photos. 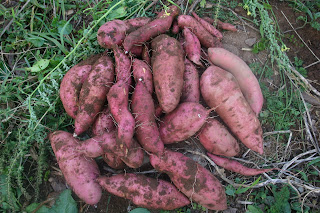 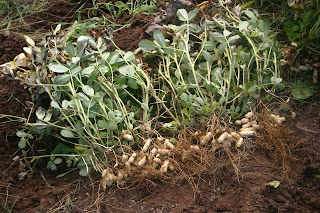 Notice the rhizobium nodules on the roots: 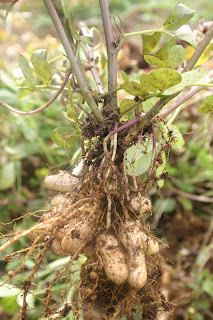 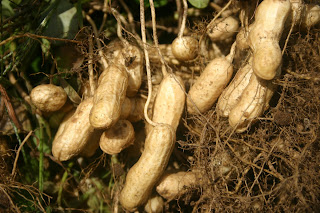 We averaged two large sweetpotatoes per plant this year. That's definitely an improvement over last year's crop, last year I planted them in overly heavy soil that didn't warm up like the rest of the garden, I scarcely had enough to plant again for this year's crop. We should get a few to eat this year though.
The peanuts were the big surprise for me, I hadn't ever grown them before this year and I had my doubts that they would be worth their garden space. They ended up producing an average of 14 pods per plant, a lot less than Carolina peanuts would produce but still decent. I hope to have a few peanut seeds for sale this year, they're hard seeds to track down.
Both these plants were grown in the garden along with everything else, no plastic mulch or special treatment. They've both proven themselves worthwhile crops, performing well in this cool, wet summer. I'm excited to see what they can do in a hot year. It will be very interesting to continue experimenting with new crops like these as their ranges creep north with a changing climate. Part of adapting will have to be adopting new crops if new ones prove well suited and our old ones can no longer cope.
Posted by Owen Bridge at 9:27 AM