Seed Packing and the New Name

The harvest is in, the seeds are dried and sorted and tallied, now it's just a matter of filling as many packets as I can before the 2010 catalogue is released! For the last week my main activity has been filling packets, as boring as that might sound it's actually very exciting work (for me) thinking about the huge potential of these seeds and the many gardens they will sow all over the world. This is the debut of my 2010 packet design, I was working with a local printer (Integrity Printing of Bridgetown) to design a slightly snazzier packet, I'm pretty pleased with the result: 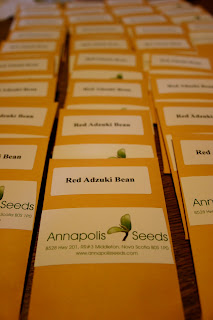 I should also announce that I've decided to shorten the name slightly from Annapolis Valley Heritage Seeds to simply Annapolis Seeds, it's less of a mouthful and just seems...better. I'm in the process of completing the 2010 catalogue, and the plan is to update the website later this month. So far I have 140 varieties lined up for the online catalogue, with more coming soon from my only other seed grower Windhorse Farm. That's about double the selection over last year's catalogue, with way more in stock. Overall I have at least six or seven times last year's seed stock, I hope there's enough of the popular varieties to go around this year.
Also check out the Nov.-Dec. issue of Small Farm Canada (the seed issue), Emily McGiffin did a great write-up of what I'm doing that has already generated a lot of buzz.
So keep an eye on the website for updates!
Posted by Owen Bridge at 8:04 AM