Last month I finally got the long awaited yurt wheel built! It was the final piece of the frame, and by far the most complicated to construct. It took 2 and 1/2 days of work with some generous guidance from Alex Cole (www.lfy.ca) and lots of help from Rabanus (who was wwoofing with Alex) to turn our initial ash log into the beautiful and structurally crucial crown of my yurt-to-be.
After selecting a knot-free ash tree that was about 5" across and as staight grained as possible (there's always some variability) I cut an eight foot length to be cleaved. Cleaving with a froe is definitely a valueable skill, and a process that's inspiringly easy. You secure your log in a brake, pound the froe blade into the end of the log (as close to centre as possible), and then use the levering effect of the froe to almost effortlessly split the log. The going is so easy you really have to keep a careful eye on the split, and to guide it back towards centre if it begins to go off. Having multiple people on hand was really helpful at this stage, the log wasn't quite as straight grained as it could have been but Alex was able to guide the split towards centre by pulling down on the log, against the direction of the split. The split wants to go in the direction of the pulling force, so it can guided either up or down this way. Even with all this shuffling around of people the cleaving only took a few minutes to accomplish.

Much more time consuming (and harder on the arms!) was the step of shaving down these two halves into flat planks. Because we essentially ended up with two semi-circles I had to shave the bottom sides flat with a drawknife. A pretty intense upper body workout!

Next was the process of steaming the plank and bending it into the wheel. After a couple hours in the steambox (quite a simple contraption of plywood and plastic liner, with a pipe attached to a boiler) the planks were taken out and while still flexible were quickly clamped around a metal cartwheel (although any other similar frame would work). Time was of the essence here, we had about 30 seconds to get them in place and clamped before the wood cooled too much to bend and risks cracking. So out of the steambox they came and with almost military precision we wrestled them around the frame one by one. Between the three of us and our prerehersed roles it went fairly smoothly. We now had a wheel!

We let it set for a few days before attempting the last major step; drilling and burning the holes for the roof poles. This is where quite a bit of math and geometry came into play, we had to decide the angles and to mark and drill each hole. Although a round hole (and therefore a round roof pole) could work, there would be no way of keeping the roof poles from sliding around once in place. It's way better to have square holes and to square off the poles to fit, that way you can select the "top" side of the pole (the straightest side and the side that just feels right being the top) and have it stay there. Chiseling is possible here but burning the hole with a red-hot steel rod is far easier and produces a much nicer edge. We heated the rod in the forge (seen below next to Rabanus there) before driving it steadily into the round (soon to be square) hole. As this work went on it developed an almost intoxicating rythme... The fire, the glowing hot steel, the dense smoke from the wheel, and then back to the fire again... there was some pretty intense energy involved.

Update, Jan. 21:
It's finished! I just added the dome made from whippy ash sticks, the purpose of which is to support the canvas (otherwise there would be an indent at the top of the yurt, quickly becoming a birdbath in our climate!). The next step now is finishing the roof poles by draw knifing the top ends into tapered squares, and afterwards drilling and attaching a twine bridle to the lower ends (to connect to the wall). To be continued... 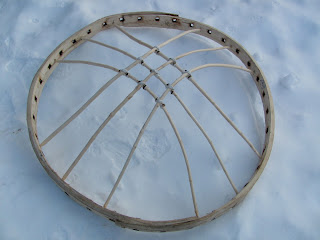