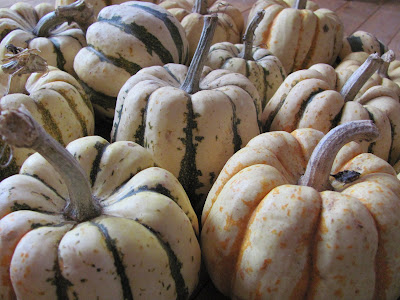 Perhaps my new favourite squash, Sweet Dumpling was a real standout in the garden in 2010. This is the second year Annapolis Seeds will have it listed in the catalogue, but last year Chris Sanford grew them for me so I didn't get a chance to try them myself. I missed out!
It's originally a Japanese variety, and a fairly new one at that dating back to 1976. They initially named it Vegetable Gourd, but sales weren't good so they changed it to Sweet Dumpling. I suspect it had a lot of both acorn and delicata in it's parentage, guessing from the shape and colour and it's dry, sweet flesh. It was probably the most efficient user of space among my squash last year, the vines only grew about 5 feet and each one produced a good half dozen fruit, so they'd be perfect for cities and intensive growing. They store fantastically as well, they don't seem to require curing like other squash do and they're quite hard when raw, so they resist cuts and bruises that lead to rotting.
The flavour is the best thing about them though. The flesh is dry and sweet and tastes distinctly like roasted chestnuts! I like them cut in half and roasted in the oven for about 25 minutes, with cheese melted on top at the end. You can fill them up with whatever topping you want. The skin is tender enough to eat too.
Posted by Owen Bridge at 10:37 AM