A New Mindset on Soil

More than anything else, the primary role of the organic grower should be to nurture a healthy and fertile soil. As long as the soil is healthy it will produce healthy plants that will proliferate with few other inputs from their human caretakers.

Agricultural and garden soil is really an ecosystem unto itself, but one that could be thought of as having a symbiotic relationship with humans. Unlike the soils of undisturbed forests or meadows, which, since the last ice-age, have been steadily increasing in organic matter and biodiversity, garden soils don’t have a constant source of fallen leaves, dead wood, or grass roots to decompose and add fertility and humus. To avoid degrading the long term health of the soil in our efforts to grow our species’ favoured plants, we need to make an attempt to replicate these soil building systems ourselves.

In any natural ecosystem, organic matter is primarily produced by plants at the point of photosynthesis and eventually added to the soil as they decompose. Without disturbance, these systems would continue increasing the soil fertility indefinitely. Because through agriculture we have replaced the natural order of things that kept the soil healthy, we can‘t just extract the biological wealth (existing humus) from the soil without also adding more biological wealth (compost, manure, leaves, straw, etc.) to replace it. Organic matter, in one source or another, should be added in regularly and in generous amounts. Especially on poor, already depleted soil it’s important to provide a boost of organic matter in order to get things started. In parts of Asia for example, the same farmland has been cultivated continuously for over 4,000 years and it’s perhaps more fertile now than it was at first. This is a major contrast from much of North America, were, in many cases, a few hundred years of human disturbance has left the once rich soil exhausted. This disparity is due in large part to the high emphasis in Asia on increasing organic matter in the soil through utilizing absolutely all available sources of organic matter and using lots of manure (both animal and human).

On our farm we produce quite a bit of manure from our animals, which we compost and spread in the garden after one year. All of our garden debris (stalks, vines, vegetable scraps etc.) is either composted or tilled directly into the garden, or in the case of vegetable scraps, fed to the goats and recycled into the garden through their manure. Leaves from the woods can be used for mulching and composting. We buy old hay from a local farm both for mulching and for animal bedding, which could be seen as bringing in fertility from elsewhere to improve the fertility here. Perhaps there is something to be said for that, but long term I’m aiming to have more of a closed circle of nutrients both generated and utilized on our farm, keeping everything fertile without needing to rob that fertility from another farm.

As well as regularly adding compost and other organic matter, a soil building practice we do a lot of is growing green manure crops to be tilled back into the soil. We try, as much as possible, to avoid having bare ground in the garden. Whenever there is no food crop to be grown, you may as well be using the space for growing organic matter in situ. We grow primarily buckwheat as a green manure in the summer, as well as oats and winter rye in the fall and winter.
I always notice a dramatic increase in earthworms and other soil life after we add any source of organic matter to our formerly depleted soil. Also dramatic is the response of plants to at last have a healthy, living soil to grow in. The areas of our garden that we have focused on enriching produce much hardier, self reliant plants. The scraggly Jerusalem artichokes that we inherited with the farm grew to eight feet last year after having compost spread over them, while the half of their bed that didn’t receive the compost grew to a mere two feet.

When you think about it, soil is one of the most crucial resources that we require to survive. The foot or so of topsoil that covers the world’s agricultural areas is what our species is totally dependent on to produce food. It took thousands of years of natural processes for that vital resource to develop, so it’s of tremendous importance not only to preserve but to enrich what we have left. A mere handful of healthy soil has countless billions of individual micro-organisms, consisting of thousands of species ranging from bacteria to fungi to nematodes. This is why it's important to think of soil as an ecosystem rather than simply as a medium for growing plants. When any ecosystem is healthy all of it’s species have the opportunity to thrive, in this case that includes our garden plants.

This gardening philosophy is a quite a shift from the predominant mindset that got us into so many of the ecological problems we’re dealing with today, the view that we should have total control over the ecosystems in which we live and that all life in the garden other than our cultivated plants are enemies and competition to be destroyed. That’s an outlook on nature that we’re going to have to collectively overcome, for the sake of all life on earth, the sooner the better. 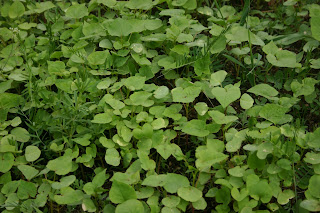 A soil building green manure crop of buckwheat. I scythe it down late in its flowering period to be tilled into the soil.