I first learned of brush walls; loosely woven heaps of branches, stumps and other organic debris often planted with a living cover of vines, from Windhorse Farm. They use them throughout their forest, fields and gardens to provide cover and habitat to all kind of wildlife, as well as to define boundaries. In addition to their ecological role, what we've discovered is that they make really great livestock fencing!

Last winter we began fencing our pastures using this technique. We made our first brush wall while we were clearing a corner of our field to make a pasture in an area that was previously logged, and therefore covered in brush and debris. This of course was perfect building material so we got straight to work. The building technique is almost totally foolproof, just throw and stack the brush into a wall roughly 3-4 feet high and equally wide, keeping in mind that the material will eventually settle. I tend to put the smaller material on the bottom and use the large branches to weigh down the top. So far this has provided a perfectly adequate barrier for our cow. I found that I could quite easily construct 40-50 feet of brush wall in a day (that's a lot faster than sinking posts and nailing rails) while at the same time it should last much longer than a conventional fence without significant maintenance. All you might have to do is add more material to the top as it settles and begins to decompose over the years.

Over half the fencing around our pastures now consists of brush walls, and I'm sure that percentage will increase now that we've realized what an impressive method of fencing it is. The next step for us now is to plant Virginia creepers, grapes, hardy kiwi and other vines to cover the walls and provide even more wildlife shelter and, in the case of those last two, a great source of fruit. 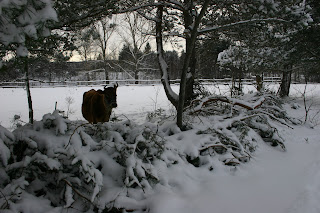