Has a lot ever happened so far this spring! It's been so busy I haven't had time to write about it. It's kind of funny, in the winter I have lots of time but nothing to write about while in the spring I have everything to write about but no time to do it!
The seeds are still selling and I'm sold out of about 3/4 of the catalog. It seems like every week this time of year there's another Seedy Saturday somewhere in the province. Most recently was Halifax and before that was the very successful one in Wolfville. This could be the busiest time of year around here just because I'm still doing my seed rounds while at the same time the garden is coming back to life and the rest of the farm needs work as well. In the garden the garlic has sprouted and Colin has planted the first peas. 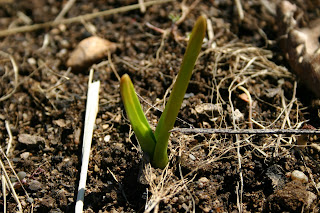 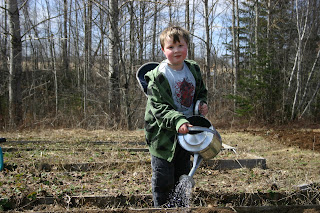 An exciting recent discovery is that the old chicken run is built on top of what's best descibed as an ancient manure deposit. I think what happened is that the previous several owners simply swept the manure out the back door of the barn until over the decades it built up into this incredible four foot deep pile of fertile black earth. I've spread over 100 wheel-barrow loads over the garden so far with lots still remaining. When the pile is gone we'll build a much larger and sturdier run to contain both the chickens and goats for the summer. The chickens currently have the run of the farm, scratching in the forest, raised beds and compost piles and dust bathing en masse along the warm foundation of the house. They can't complain too much about their new summer enclosure, at several thousand square feet it would be paradise for the average battery-hen.
We're having the newly cleared upper field plowed for the first time in a few weeks. After the roots are raked out and we get some manure spread to enrich the poor sandy soil we hope to grow some seed and food crops up there this year. What's good about having two seperate fields like this is that we can isolate crops like squash and corn for producing seed. My plan with squash is to plant them on hills of manure which should make that limited resource go further. We'll just have the root-zone heavily enriched while the vines can sprawl over the poorer soil. I'll plant about an acre of alfalfa in the upper field this spring as a long-term green manure crop. The deep roots bring up nutrients from the sub-soil while at the same time fixing nitrogen. What the field really needs though is more organic matter. The hope is that the alfalfa will produce enough biomass that we can mow it several times a year to add to the soil. I suppose we'll see how it goes.
Bessie is really enjoying being out on the pasture again. Although not much is growing yet you can tell she loves being out of the barn. We think she'll be giving birth any day now. Stay tuned... 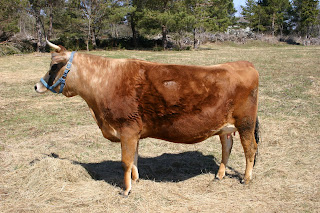