Our Land Clearing Saga (with many photos)

This week we finally finished the clearing project that we've been working on since we arrived on the farm. When we arrived in the fall of 2006 parts of the farm had grown up in spruce, pine and cherry after being abandoned about 30 years ago (see photo). 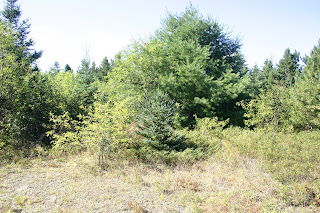 Two winters ago we felled all the trees, which was a huge job but one that produced tons of great firewood. 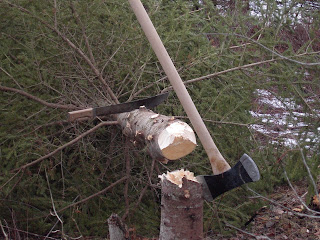 Here's what one of the two new fields looked like after the initial clearing work was finished. 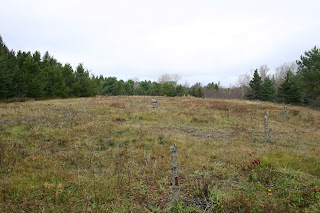 At that point we were forced to bring in some slightly heavier machinery than our usual hand tools. We were lucky to have Thomas Brown (whom we can't recommend enough) close nearby, in just four hours with his tractor last fall he pulled as many stumps as a pick-axe wielding person could in a summer's work. The efficiency of his machine was incredible, it plucked out two-foot diameter pine stumps in seconds. 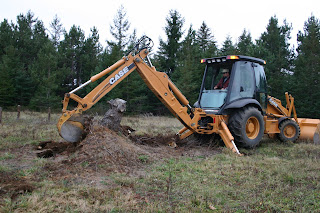 We had him come back last week to finish the job. The field is now plowed and harrowed and pretty much ready to work save for some roots that still need pulling. The soil is a very light sandy loam and while not as fertile as the main field by the house it's not as bad as we initially thought. The long-term plan for the field pictured is to grow both seed and food crops while another new field of about an acre will become a hay meadow. We're going to have to do a lot of soil building in the coming years in the future seed field, the plan for now is to grow both alfalfa and sorghum x sudangrass as green manure crops to provide a boost of organic matter and nitrogen. A small corner of the field will be planted with squash and corn this summer after we enrich it with lots of manure. The field is far enough isolated from the main garden that we can now grow two varieties of cross pollinating crops like corn without them crossing. 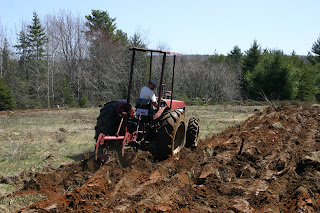 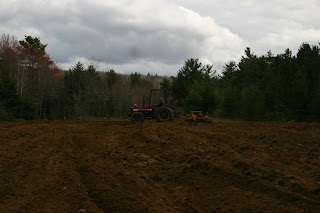 And there it is, the farm is back after decades of non-use. After clearing two acres with the aid of a tractor we can really appreciate how much work it must have been to establish our farm 150 years ago. Pulling those old-growth stumps is a task I'm still not sure how was accomplished. It seems like a tragedy that the fruit of so much work could be allowed to be so quickly lost, especially when it's as important a resource as our farmland.
Posted by Owen Bridge at 6:36 PM