Lots to update on

I'm finally able to do some writing again after a solid month of garden and farm work. With the help of our WWOOFer Bjoern I got both the seed and food gardens planted weeks ahead of schedule. This year we've got over 60 bean varieties on the go, 40 peas and about 40 tomatoes, among many others. A few of the beans are my own strains that I'm working towards stabilizing. My most promising of these is a striped variation of the pole bean McGrath's Africa. Two years ago in our McGrath's Africa patch I discovered a plant that produced black and white striped seeds in striped green pods, rather than the usual white seeds in leathery purple pods. Last year I grew them out and 95 percent stayed true to type (which is a great rate). If I can stabilize it for a few more years I might even be able to release it as new variety, any name suggestions?


We also planted an acre of Sorghum x Sudangrass in the newly cleared upper field as a green manure crop. Without the ideal equipment of a harrow and some power source to pull it (animal or machine) I ended up broadcast seeding it and then zipping over the field with the rototiller set to it's fastest speed. I set the tines very shallow so that it only mixed the top two inches or so of soil, it worked almost like a rake. A small corner of the upper field we've enriched with tons of manure and we've planted sunflowers, tomatoes, peppers, adzuki beans, chickpeas, millet and corn, as well as a huge patch of squash planted on mounds of manure. We're experimanting with these mounds as a way to stretch what little valuable manure we have. The roots of the squash will be growing in almost pure manure while the vines can sprawl over the less fertile soil around the mounds. We'll see how well it works. 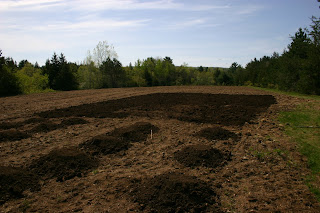 Now that the garden is planted and Bjoern's keeping the weeds under control I'm starting to put some more time into the yurt. Last January I took a great yurt-building workshop held by Alex and Selene Cole of Little Foot Yurts over in the Gaspereau Valley. Over the winter I cut, peeled, shaped and cured the poles for the yurt, and starting now I'm trying (emphasis on trying) to get it assembled. If I'm sucessful, updates to follow... 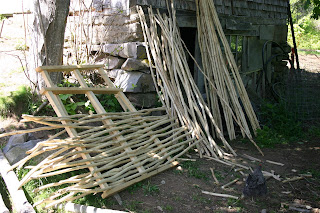 The yurt poles after we carried them in from the woods. Note the frames used for shaping the khana poles (wall poles).
Posted by Owen Bridge at 4:34 PM