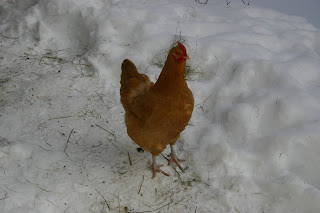 Here are the most recent additions to our crazy menagerie of barnyard animals, eight Buff Orpington hens! Our flock had dwindled over the last two years from eight hens to only four and they were struggling to keep us stocked with eggs. Although we keep our chickens until they die of old age, the winters always claim a few hens every year. We had to break down and actually buy eggs a few weeks back, and it was at that point we knew we needed some additions to the flock. Luckily a friend of ours had a big flock that was her daughter's 4-H project, so she was happy to find a (vegetarian) home for the surplus hens!

Introducing them wasn't nearly the ordeal I was fearing. For about an hour the new hens sat hudled in the corner, the old hens sat watchfully in the other corner and Rocky the rooster was pacing back and forth between the two. One at a time a new hen would come out of the corner, Rocky would do a little dance around her and then, accepted into the flock, she would walk over to the old hens to get pecked at. This procedure was repeted for all the newcomers until all twelve hens were mingling and getting along in relative order. And that was it! No real fighting at all!

The two groups still prefer to keep to themselves while they're out, but the flock seems to have totally accepted the new hens. We're now up to between six and eight eggs a day on average, which is great for this time of year!
Posted by Owen Bridge at 5:28 PM