Although it's freezing cold today, it's nice to think about the garden that will be flourishing in just a few more months. Here's a little article I recently wrote on a favourite crop of mine that I feel should be far more widely grown in Nova Scotia: 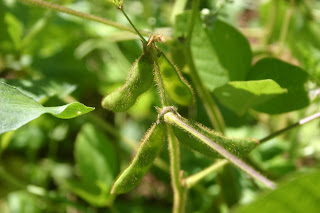 Edemame soybeans are both one of my favourite vegetable crops and one that’s very under-utilized. Unlike the more common beige soybeans that are usually used for tofu and animal feed, edemame soybeans have been bred for flavour and are picked fresh when they’re plump in their pods like peas. They’re much more popular in Asia where the way to prepare them is to steam them lightly (one minute if fresh, 3-4 if frozen), before popping the seeds directly into your mouth one by one. The ultimate slow food! Like all vegetables really, the difference in taste between edemames fresh from your garden and the frozen ones from a bag (grown in China) is incomparable. It’s a mystery to me why all the store-bought edemame soybeans are from China when they’re so well adapted to growing across so much of Canada.

The soybean plant grows to about thigh height on good soil, depending on the particular variety. Being legumes, soybeans fix nitrogen which allows them to grow on poor soils. However, like all vegetables you’ll have much better results planting them in healthy, fertile soil. They like heat but nothing we can't provide in the Maritimes. If you can grow beans or corn in your area you can grow soybeans! They’re more drought tolerant than most other plants and they shouldn’t need any watering after they’re established. I plant mine in early June after the last frost in wide rows (multiple rows in a strip between walkways, as opposed to single rows) which creates a dense canopy of foliage that shades out weeds. Planting father apart would give a higher yield per plant and a similar yield overall, but without the weed suppression that a dense planting provides. If you have limited seeds you might prefer a wider spacing than me. The pods should be ready to harvest in late August. The seeds should be plump but not overripe (think a perfectly ripe pea pod).

I really think that edemame soybeans deserve to take their place alongside the more common vegetables in Canada. They grow so well in our climate that it’s insane that we should have to import them from the other side of the planet from a country with such a suspect record of food safety. There's no better place to get the ball rolling than in your own garden!

Aside from me of course here are a few Canadian seed sources of edemame soybeans: